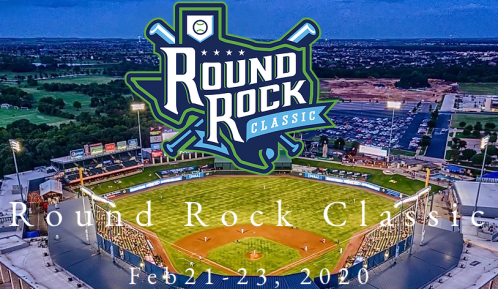 The Houston Cougars and the Texas Tech Red Raiders closed out the inaugural Round Rock Classic with a thrilling ballgame that was not decided until the last of the tenth inning Sunday night at Dell Diamond.

The Cougars got on the scoreboard in the top of the first inning when Tyler Bielamowicz walked, stole second, reached third on a wild pitch, and scored on a groundout to second by Brad Burckel . . . The lead would not last long though, as Texas Tech’s Dru Baker hit a homerun on the first pitch he saw to leadoff the bottom of the first.

The teams remained tied until the top of the fourth when Kobe Hyland roped a two-out double to right-center to plate Blake Way from first base, Way had reached base because of a two-out walk.

Houston starter Jared Pettitte pitched into the sixth inning, perhaps his best outing as a Cougar . . . Aside from the leadoff homerun and a triple to center that would eventually score, Pettitte was keeping his pitch count relatively low . . . Pettitte gave way to Carter Henry with one out and runners on the corners. Henry would load the bases, but he would escape the inning unscathed and go another scoreless inning in addition to that.

Neither offense was able to get a run across in innings six thru nine . . . In the top of the tenth, the Cougars were kept off the bases, setting up the bottom of the inning . . . The Red Raiders manufactured a run with a couple of base hits against Brayson Hurdsman who pitched three quality innings, the only run he allowed was the game-winning run in the bottom of the tenth to send the Red Raiders home a winner.

The Cougars hung tough with a top-ranked national team, but they fell just short . . . The solid pitching by the Cougars was not enough to outlast Texas Tech pitching.

The Cougars head home now to face University of Texas-Rio Grande Valley (UTRGV) on Tuesday evening at 6:30 at Schroder Park before welcoming Texas State to town for a weekend series to close out February and begin March. –