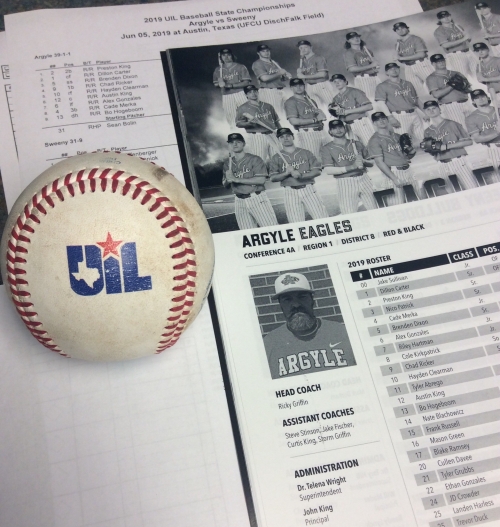 The Argyle Eagles claimed the 2019 4A Texas state championship at Disch-Falk Field  Thursday night with a 6-3 win over the Sweeny Bulldogs.

Cougars commit Bo Hogeboom continued to bat as the designated hitter for the Eagles . . . Argyle scored a run in the top of the first to take an early 1-0 lead . . . They would not get on board again until the fourth, when, still leading 1-0 they put together an inning in which they plated three runs.

Hogeboom helped lead the fourth inning attack when he hit a one-out single to left-center to score a runner from second and put the Eagles up 3-0 at that point . . . When Hogeboom reached base, a courtesy runner took Hogeboom’s place at first base, and the runner would score a few batters later on a single to put Argyle up 4-0 heading to the bottom of the fourth.

Hogeboom walked in the fifth with two outs and runners on second and third . . . The next batter would be hit by a pitch which walked in another run to make the score 5-0 . . . Sweeny closed the gap in the fifth when they scored three runs to cut the lead to 5-3.

Hogeboom completed his night at the plate with a two-out walk in the seventh inning, his second walk in as many plate appearances . . . Hogeboom started the at-bat with a runner on second, but two wild pitches scored the runner and left no one on for Hogeboom . . . Given the situation, it was a disciplined plate appearance for Hogeboom and his patience at not chasing out of the strike zone was rewarded with a free base after Argyle took a 6-3 lead.

Argyle ends their season with a 40-1-1 record . . . The Cougars commit comes from a program that does not know losing. –